Town Council Meeting: The Town Council will meet on Monday, February 6 at 7:00PM in the Town Hall. 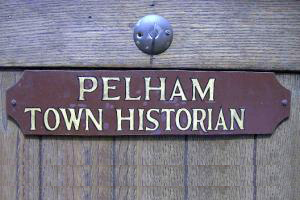 For more on the history of the Town of Pelham - please visit this website.

Pelham is the oldest town in Westchester County. Thomas Pell signed a treaty in 1654 with the Siwanoy Indians to buy what is not only the Town of Pelham but is all of the borough of the Bronx and the land along Long Island Sound north to the Rye border and inland to the Bronx river. Pell named his manor "Pelham" in honor of his tutor, Pelham Burton.

Thomas Pell's nephew, Sir John Pell, was the first of the Pells to live in Pelham Manor. He inherited the land in 1670 and until the American Revolution only the Pell family lived in Pelham.

During the American Revolution, the Battle of Pelham was fought along Split Rock Road and Wolf's Lane on October 18, 1776. Despite a fierce fight, the British army commanded by Sir William Howe won the battle.

The Joshua Pell House, built about 1760, is still standing today at 145 Shore Road. Another Pell House, which was remodeled by the Hay family in the 1820s and renamed "Pelhamdale", still stands at 45 Iden Avenue.

Little is known about man the believed to appear on the New Rochelle half-dollar. On the 1938 New Rochelle, N.Y., 250th Anniversary half-dollar, a man “Three Musketeers”-like grabs hold the lead of a calf. Nowhere on the coin’s obverse or reverse is the man identified or is it explained why he appears to be walking a baby cow. “Many people believe that the figure in the late 17th century costume is meant for John Pell, but this is unconfirmed,” according to Anthony Swiatik and Walter Breen in The Encyclopedia of United States Silver and Gold Commemorative Coins 1892 – 1989. Despite this ambiguity, the man appearing on this commemorative half-dollar is generally assumed to be, in most numismatic texts, John Pell. 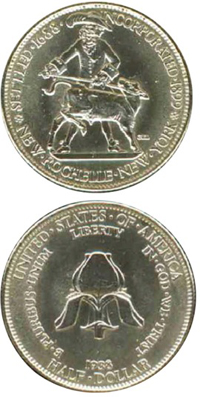 The New Rochelle half dollar was the last new commemorative coin issued by the U.S. Mint prior to World War II. There were four coins who closed their runs in 1939, the Arkansas, Boone, Oregon Trail and Texas half dollars. But the New Rochelle coin was the last brand-new "commem" to appear for nearly a decade. It proved to be a highly effective finale, for its much admired design: left the hobby audience calling for an encore. The coin commemorates the 250th anniversary of New Rochelle, N.Y., a medium-size city in Westchester County, just north of New York City. Its obverse shows a fatted calf being roped and held by a figure representing John Pell. It was Pell, the lord of Pelham Manor, who sold 6,ooo acres of land-the site of New Rochelle-to French Huguenot settlers in 1688. One of the conditions was that Jacob leisler, the man commissioned to handle the transacdon for the settlers, would give to Pell and his heirs "one fatte calfe" on the 24th day of June every year thereafter, if they demanded. The coin's reverse depicts a fleur de lis, a symbol which appears on the shield of the City of New Rochelle. Gertrude K. Lathrop prepared the appealjng designs.

Congress authorized 25,000 New Rochelle half dollars; more than 9,700 were melted, leaving a net mintage of 15,266. This is a relatively low figure, and makes this a semi-key issue in the series. The coin was authorized in 1936 and minted in 1937, but didn't reach the public until 1938-the year of the observance and also of the date on the coin. Fifty proof specimens were struck on polished planchets, and these always bring healthy premiums. Business-strike exarnples are scarce and highpriced, too, in gem condition.

In keeping with the design’s ambiguity, frustratingly few specific details are available about Pell. Most background information about Pell comes through facts about his father, also named John, who was a prominent mathematician.

The senior Pell was born in the English Channel town of Southwick in 1610 or 1611. Pell Senior entered Cambridge at 13, where he received his master’s degree in mathematics by age 20.

As a math professor throughout England and in the Netherlands, Pell Senior developed the division sign.

Pell Senior was also politically affiliated with the Cromwellian regime. During his tenure as lord protector for the English Commonwealth, Oliver Cromwell appointed Pell Senior to lecture on mathematics.

Pell Senior also served as an agent for the Commonwealth government in Zurich, Switzerland, from 1654 to 1658.

Pell was presumably born sometime between his father’s leaving Cambridge and the late 1650s.

While Pell Senior was achieving eminence in mathematics, his physician brother Thomas was carving out a small empire in New England.

On Nov. 11, 1654, Thomas Pell acquired 50,000 acres of land in a treaty with Siwanoy Indian Chief Wampage. The parcel of land encompassed all of what is now the Bronx and land stretching west along the Long Island Sound to the Hutchinson River in what is now Westchester County.

Thomas Pell named his acreage Pelham in honor of his tutor Pelham Burton.

The Dutch government in the area then known as New Netherland tried unsuccessfully for several years to remove the English and Thomas Pell from their region. However, Thomas Pell and England succeeded in driving the Dutch from what was soon renamed New York. Thomas Pell led the English militia to accept Governor Peter Stuyvesant’s surrender on Sept. 21, 1664.

Thomas Pell died without children in 1669. He willed his estate to his nephew, John Pell, who moved from England to New York.

When the Protestant French Huguenots were denied protection by King Louis XIV, thousands of the Huguenots left France to settle in the Americas.

Acting New York Gov. Jacob Leisler appealed to Pell to sell 6,000 acres plus a donation of 100 acres for a French church of Pelham to Leisler to sell to the Huguenots.

The Huguenots began settling on acreage in 1688, when they found what would become New Rochelle.

A condition in the sale was that Leisler or his heirs would provide “John Pell his heirs and assigns, of the said Manor of Pelham … as an Acknowledgement to the said Manor one fatt calfe on every fouer and twentyth day of June Yearly and Every Year forever (if demanded),” as included by Swiatek and Breen.

Pell served on Westchester County’s first court in 1683 and in the colonial governor’s council.

The History of Pelham and the Toonerville Trolley